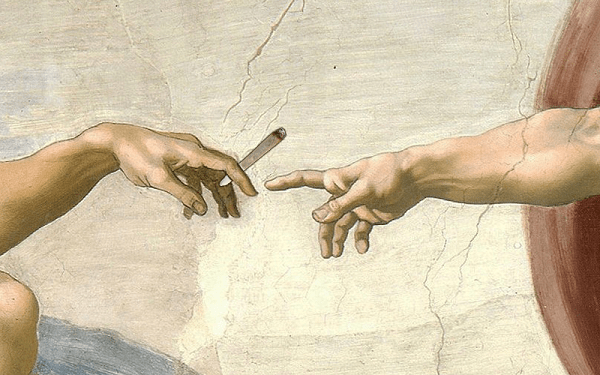 Don’t be the guy that hogs the joint. Stoner rules are about knowing what to do and what not to do when smoking weed with people. It doesn’t matter whether you’re smoking with your friends or with complete strangers, stoner rules are important if you don’t want to annoy your fellow stoners. Some of these rules are more important than others, but it’s best that you know all of them if you’re looking to be invited over the next time your friends decide to light up a joint.

This is probably one of the most important, if not the most important, stoner rules on this list. There’s nothing worse than being the guy that only smokes everyone else’s supply. Just because your friends offered you a bong once, doesn’t mean you should expect it every time you go around to their place and trust me, stoner’s might seem chilled, but they’ll notice it if you keep smoking their supply.

The best way to not be a stoner bum is to bring your own supply every time you go to smoke somewhere. You might not always need to use it, but it’s better to have a bud with you and not need it than not have any bud there and look like a bum. Obviously, there are going to be times when you’re out and then I’m sure your friend won’t supplying, but it always helps to be thoughtful. Also, who you’re smoking with will affect how often you need to bring dank. If your friend has a lot of bud, they might tell you that you don’t need to bring your own cannabis every time, but don’t just assume your friend wants to sponsor just because he has a lot of bud. If you’re unsure of whether or not to bring, just ask, no one is going to be offended if you simply ask ‘should I bring dank?’ and you’ll come across as a lot more thoughtful.

This is another one of the golden stoner rules that you need to remember. Just because you want to smoke or consume THC, it doesn’t mean everyone does. Maybe they don’t like smoking, maybe they don’t like getting high, or maybe they’re just not feeling up to it at the moment – whatever the reason, you should never peer pressure someone who doesn’t want to take THC into taking it. Cannabis is meant to be a medicine that helps you relax and have a good time, but if you’re forced into doing it you’re probably not going to enjoy yourself. Don’t be that guy that people have to smoke weed around, otherwise, you’ll very soon find yourself being ignored by those that don’t want to smoke every second of the day.

You’re all chilling and you’re getting ready to smoke and it’s your turn to clean the bud – make sure you do it properly. Knowing how to properly clean bud is as important as knowing which end to light a joint. A new stoner might not worry too much if they find a seed or a piece of stem in their bong, but experienced stoners will get annoyed if you don’t properly clean the bud of stems and seeds. Not only do stems and seeds not taste nice, but it’s also unnecessary damage to your lungs. Follow proper stoner rules by cleaning your bud properly. You want to remove all the seeds and stems, but you also don’t want to throw away quality bud.

There are two sides to properly cleaning bud. Firstly, you don’t want to smoke stems and seeds, but secondly, you don’t want to throw away someone’s bud. If you’re cleaning your own bud then it isn’t really a problem, but if you’re cleaning someone else’s bud you better make sure they don’t catch you throwing away good pieces of bud – this is a sure way to make someone mad. Proper bud cleaning skills aren’t difficult to master but they are important when smoking with other people.

This might seem obvious, but after you start smoking this stoner rules becomes more and more relevant. The higher you get, the clumsier you’ll get, so make sure you are careful at all times. They probably won’t mind if you knock over a glass of water, but start hitting over the bud or breaking smoking apparatus and you’re going to get kicked out very quickly.

There are a few key things to be careful for when smoking weed, so if you’re worried about making a mistake, just look out for these two things:

If you happened to make a mistake and knocked over someone’s bud or broke their apparatus, you must immediately clean up the mess and offer to replace anything you broke. Don’t stress too much though because all of us have broken a bong at some point – accidents happen.

Smoking weed has a long history of being a peaceful activity to enjoy with friends but it’s also something that can be quite intense if you’re not used to it. Maybe you’ve been smoking for many years and can handle your high, but not everyone can. The next time you’re smoking with people who aren’t as experienced as you, be cool about it. If you notice someone’s feeling awkward or uncomfortable, let them know that everything’s fine and help them have a good time. We all just want to enjoy the experience, so use the knowledge you have to help them enjoy it. Not only will you have a better time, but the people will like you for your patience.

If you’re smoking a joint, you need to know the stoner rules. Puff, puff, pass, is an easy rule to remember because that’s all you need to do: take a puff, take another puff, and then pass it along. That’s the simple methodology of smoking a joint with other people. If you don’t feel like taking two puffs, it’s perfectly fine to take only one, but it’s when you start taking more than two that people are going to start to take notice. Do it once and everyone will accept it as a mistake, but do it every time the joint comes to you and people are going to start to notice it.

You may be someone who prefers to take three small pulls than two big ones, that may be fine in your regular smoking circles if you’ve already spoken about it, but don’t just assume everyone understands and keep it to the traditional ‘’puff, puff, pass’’ on your first time with new people.

If you’ve been around stoner’s then you’ve probably heard the word ‘irie’, it means good vibes or peace and if you want to keep everyone in the smoking group peaceful you better pass the joint or the bong to the left. Stoners are irie when the proper order is followed, but start passing to the right and you could hear some comments being made. The generally accepted rule for smoking is that the person on the left is next. It’s a lot easier to use this general stoner rules than to make up a new order every time you smoke with people. Most stoner’s know this rule so they won’t have any problem picking up on the trend. This rule goes for joints, bongs, pipes, vapes, or any cannabis smoking that is taking place. The next person is also the person on your left.

8. Ask before you spark up.

When you’re smoking the creativity can really start to flow. You might be mid smoking when you remembered this really awesome story that you wanted to tell your friends. Before you start telling them, make sure you pass the bong or joint to the next person. There’s nothing worse than someone telling a story when they haven’t passed the smoke. Just pass it and then you can go on telling your story, simple as that. The same thing goes for if you’re stacking the bongs. This is a little bit more forgivable, but if you’re stacking the bongs for everyone make sure you do your job and don’t get caught talking when you’re meant to be stacking. If you do this you can expect someone to call you out at some point in the night – everyone wants to get high, man.

Everyone’s there to smoke weed, not ash, so make sure that’s what you’re passing them. This goes for a joint, bong, or pipe, make sure there is still cannabis left before you pass it. If you’re smoking a joint it’s all about passing them the joint before it reaches the filter. As soon as you reach the filter you’re going to get a horrible taste of burning cardboard (or whatever you used to make your filter) and this isn’t enjoyable for anyone. If you’re smoking a group bong/pipe then make sure there is still some green left in the bowl for them to hit. If you’re not sure, just ask them or warn them that there might not be anything left. This way they can do a quick check before getting a bad taste in their mouth or ash all over them.

If you’re sick, even if you just have a runny lose, let your smoking circle know. They might say it doesn’t matter, but better that than you get everyone sick. Remember, when you smoke with someone you’re exchanging saliva on a small scale and this means germs. If you’re very sick and still want to smoke with your friends being your own bong or your own small joint so that you can still participate without putting everyone else at risk. If you start blowing your nose while smoking a joint you can definitely expect a few odd looks.

The final stoner rules is to not wet the mouthpiece. This goes for joints, pipes, and bongs but is especially important for joints. Joints, being made out of paper, are very susceptible to being wet and you can ruin the joint if you get the filter too wet. Make sure your lips are dry and that you only touch a small portion of the filter to your lips – the whole joint doesn’t need to go into your mouth. If you’re smoking a bong or pipe it’s still important, but it’s a lot easier to fix if you do make this mistake. If you happen to drool or wet the mouthpiece, just grab a towel or piece of paper and dry it off. It’s a lot better to admit that you drooled a bit than for someone to feel your spit when they smoke.

Weedium Follow We are all about hooking you up with the dankest buds, gear, and cannabis news. We hope you enjoy this article crafted especially for you by the Weedium Team.
« Cannabis Pasta Sauce
How do Seed Banks Maintain the Quality of their Seeds? »