Cannabis for PMS: Cramps and Chronic 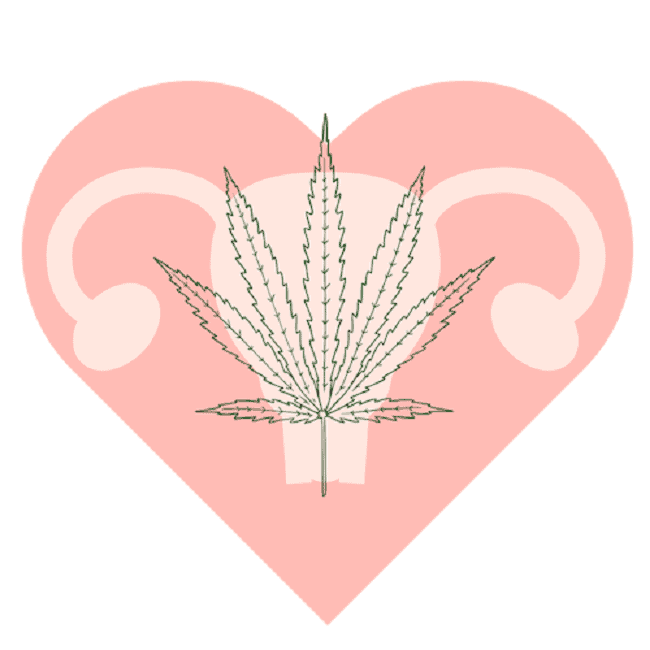 Menstrual cramps are the bane of a lot of women’s existences. Even when the cramps are described as mild, they still suck. But my doctor actually described mine as “debilitating dysmenorrhea”. “Debilitating” is a nice way of saying that I get them so bad that it pretty much makes everyday activities impossible, and all I can do is curl up in a ball and wait until it ends. “Dysmenorrhea” is the fancy medical term for menstrual cramps. Obviously, I can’t speak for all of womankind, but to me, it feels like my uterus is attacking me, or that my body is rejecting it and trying to force it out or something. I cramp so bad that you can actually see the spasm on the outside when you look at my belly.

A blessing and a curse.

There are two types of dysmenorrhea: primary and secondary. Primary is the most common type that we tend to think about when we think about the cramps. Secondary dysmenorrhea is the result of reproductive disorders. And then there are disorders to consider, as well. Endometriosis is a disorder in which the tissue that usually lines the uterus’s insides grows on the outside. It creates a lot of spasms and pain. I’ve had friends that have struggled with it their whole lives, and I can safely say that even though my menstrual cramp pain is bad, theirs is worse.

What causes cramps to hurt? Well, aside from the fact that your uterus is cramping, there actually is a scientific reason. Cramps are contractions of the uterus. They’re an attempt by the uterus to expel its lining. Sometimes it can contract too hard, putting pressure on nearby blood vessels. When this happens, it cuts off oxygen flow to the uterus, which hurts like hell. When you understand what causes cramps to hurt, it’s not surprising that they also cause dizziness, nausea, and headaches. Lack of oxygen to any part of the body can cause similar symptoms.

There are a number of home and pharmaceutical remedies for menstrual cramps, none of which actually work. Their effect is more like taking a Tylenol for a compound fracture- it simply isn’t enough. Some of these include chamomile and various other herbal teas, heating pads, and Non-Steroidal Anti-Inflammatory Drugs, or NSAIDS. NSAIDS tend to work a bit better than Tylenol for cramps, but they don’t make the pain in a part of your body being expelled through another part of your body go away entirely. They also have some pretty gnarly side effects. Have you ever read the drug warnings on a bottle of ibuprofen? They can give you ulcers and make your stomach bleed, if nothing else, and that’s not really something you want when you’re dealing with menstrual cramps already.

Cannabis for PMS has been used to treat cramps for centuries. It’s been used as a treatment as far back as Ancient Mesopotamia, which is one of the oldest civilizations known to man (or woman). And, it’s a fairly well-known fact that Queen Victoria used it for cramps and PMS. She quite enjoyed it in the form of tinctures. And don’t let what you think you know about tinctures nowadays fool you, hers had THC in it because they didn’t exactly have the technology to remove it back then. (This is a thing that comes up and I’ve had to argue with my friends, so I thought I’d pass that along. Just because we have CBD oil now doesn’t mean that Queen Vic did.)

Science is starting to catch up and understand what stoner chicks like me have known for a while: weed helps with cramps, and it’s not just some trick of the mind where you’re simply too high to notice that it hurts, either. We know that its pain-relieving powers are thanks to the way that cannabinoids in pot interact with our endocannabinoid system. Specifically, the cannabinoids work with CB1 and CB2 receptors to control the release of neurotransmitters, which in turn regulates how much pain we feel. And, there are a ton of these receptors that line the female reproductive system, which means that it’s super-effective at treating any sort of pain in that region. Cannabis for PMS also has anti-spasmatic properties and has been being used to treat seizures and muscle cramps in other conditions, as well.

The proof is in the science.

In 2017, the New York State Assembly considered a bill that would add dysmenorrhea to the list of conditions that qualify for treatment with medical marijuana. Lisa Rosenthal, an Assemblywoman, actually wrote part of the bill and said this in it: “Medical marijuana can alleviate many of the painful effects of dysmenorrhea.” So, if legislative consideration is any sort of indicator, it appears that more people are coming to understand that pot works to treat cramps. Sadly, when I went to check the list of conditions that are qualified for treatment with medical marijuana in New York, dysmenorrhea was not on the list.

PTSD was being considered at the same time as dysmenorrhea, and it made the list. It would appear that they chose PTSD over menstrual cramps, which leaves a bittersweet taste in my mouth because I suffer from that, too. But, the fact that the bill was even considered is still good news because it raised awareness about the effectiveness and healing power of sweet Mary Jane on the lady parts.

Menstrual cramps and PMS are conditions that aren’t approved for treatment with medical marijuana in some places. This is in spite of historical, anecdotal and scientific evidence that it works. And, given the fact that half of the world’s population is prone to these conditions on a monthly basis, it seems irrational and inhumane that they aren’t legally allowed to obtain medical marijuana to treat it.

Some leading women are into it too.

It would seem that I’m not alone in that sentiment, as Whoopi Goldberg has said some really similar things recently. She’s long been an advocate of medicinal marijuana. She gets glaucoma-related headaches, for which she used to smoke joints. But, she’s been pretty open about how much more she likes smoking from her vape pen. And she thought if it worked for her headaches, it would work for cramps.

So, she teamed up with Maya Elisabeth, who is already a successful and established canna-business lady to create Maya & Whoopi. Maya owns a female-run company, called Om Edibles, in Northern California. Together, the two have developed edibles, rubs, tinctures, and a bath soak that’s infused with THC. Goldberg says they’re great products for relief, rather than getting high. “Smoking a joint is fine, but most people can’s smoke a joint and go to work. This, you can put it in your purse. You can put the rub on your lower stomach and back at work, and then when you get home you can get in the tub for a soak or make some tea, and it allows you to continue to work throughout the day,” she says.

There are actually several options available to women now, in terms of how you ingest your cannabis for PMS. For instance, you have the option to smoke or vape it, ingest it in the form of edibles or use a topical solution. And, you can use a combination of THC and CBD, just CBD, or just THC. I personally recommend smoking a combination of CBD and THC. Why? The short answer is that THC works to relieve muscle spasms, and CBD relieves pain. So, the combination of the two cannabis for PMS treats all of your symptoms. Plus, smoking cannabis for PMS will give you near-instantaneous relief.

The deal with CBD.

There’s a new trend in using CBD to treat menstrual cramps: CBD vaginal suppositories. It sounds like hoopla-ha (ha!), but there’s some science behind it. The walls of the vagina are thin, mucosal and porous, so it absorbs stuff directly into the bloodstream quickly. Plus, the suppositories rest near the cervix, which is pretty much as close as one can get to the source of the problem without actually cutting themselves open and getting in there. The only problem with these is that in the U.S., they aren’t regulated by the FDA. So, it’s important to read the ingredient list.

There are actually some CBD suppositories that are made with only CBD and coconut oil, making them all-natural. The other problem is that they come in one-size fits all doses, whenever different people require different doses. If you’ve never taken CBD, 100mg straight to the bloodstream is probably enough to get you (and your vagina) super high and uncomfortable. On the other hand, if you’re a seasoned vet with cannabis for PMS, you could probably handle that much and smoke a blunt, too. So, in short, watch the dosage and the ingredients before you go using these.

Right now is probably the best time to be a woman. There are SO many options to choose from when treating cramps with the chronic! And, you really can’t go wrong with any of them. No matter which delivery method you choose, cannabis for PMS is really effective at treating menstrual cramps, and won’t leave you with a bleeding stomach and ulcers the way that Midol can. But, it may make your ritual of Netflix and a pint of ice cream a lot more enjoyable.

Weedium Follow We are all about hooking you up with the dankest buds, gear, and cannabis news. We hope you enjoy this article crafted especially for you by the Weedium Team.
« 10 Tips for Making Killer Cannabis Cooking Oil
What are CBD Edibles? »