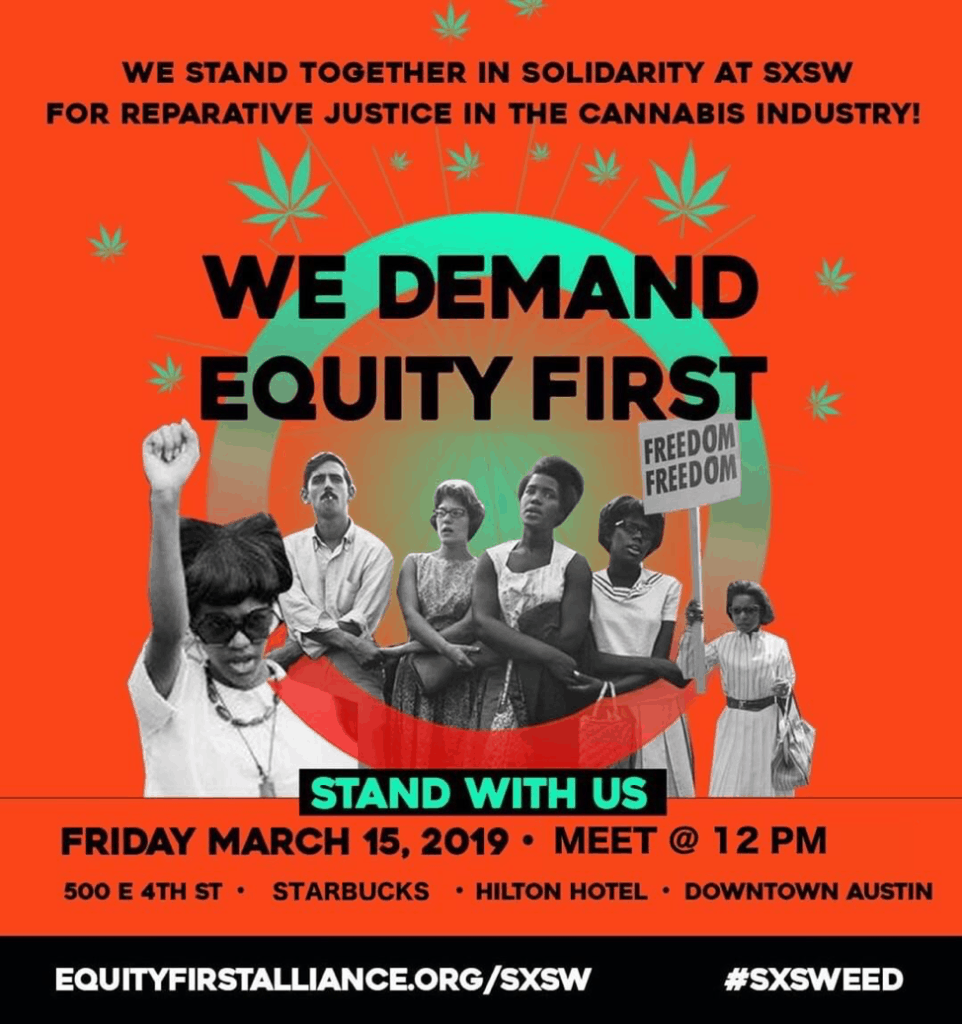 Scoff at protests? Well, don’t. Even Harvard agrees that they’re a successful vehicle for demanding change, back in a 2011 study. Especially in getting the community “politically activated”, reads the report. And, with the rise of a select few quickly accruing all the political and financial power post cannabis legalization, folks in the equity and repair advocacy world would agree with the findings.

SXSW, best known for blending festivals and seminars that “celebrate the convergence of the interactive, film, and music industries” has added a “Cannabusiness Track” to the annual festivities set to takeover Austin, Texas this year. Social equity advocates are organized and prepared to seize this opportunity, too; highlighting that the conference is “taking place less than a mile from Travis County Jail, where people of color are still disproportionately incarcerated for cannabis possessions, [and] while multibillion-dollar conglomerates that are disproportionately controlled by white men” are thriving.

Former House Speaker John Boehner, a documented prohibitionist with a voting record in Congress (1991-2015) displaying that he’s consistently opposed criminal justice reform, civil rights, LGBTQIA+ protections, environmental protections, and public education, is scheduled to give the first keynote this Friday. Social equity advocates have little faith in the sincerity of Boehner’s previous claims that his “thinking on cannabis has evolved”, especially since he’s now on the board of one of the largest cannabis investment companies, Acreage Holdings, where he is personally capitalizing off the Legal US Cannabis Market.

Could SXSW’s decision in speakers be representative of a myopic vetting process and possible larger stance on corporate responsibility? Or a move in which SXSW has meticulously provided racial justice and social equity advocates two of the most problematic cisgender white men in cannabis? Time will continue to tell how major brands and corporations employ and negotiate equity best practice standards and position themselves on social justice issues alike. And we’re paying attention for all of it.

Chas Moore, Executive Director of the Austin Justice Coalition, is also paying attention. “It’s hypocritical for an Austin based company like SXSW, a company imbedded in a city that preaches diversity and inclusive to neglect the work of committing to create an inclusive space, and instead, give a keynote platform to John Boehner. This is disgusting,” says Chas.

In their press release and call to action released earlier, Equity First Alliance emphasizes that “after 24 years of devastating communities with his policies” John Boehner is profiting off of cannabis in the wake of the War On Drugs. Activists plan on making their voices heard during and outside of his speech tomorrow.

According to advocates, another vastly problematic speaker is MedMen CEO, Adam Bierman.  Bierman’s speech, entitled “The New Normal” has activists and community members crossed, asserting that with MedMen’s multiple allegations of wage theft, racism, and homophobia in the workplace, as well as financial improprieties in their pursuit of profit, he “cannot and should not be speaking to “The New Normal” in cannabis.

Despite an estimated valuation of $1.6 BILLION dollars, MedMen has made no “significant commitment to funding equity, justice, or repair in the cannabis industry” to date. Further, top MedMen executives received a reported 10.5 MILLION dollars in 2018 bonuses.

“Our protest at SXSW sends a bold message in support of cannabis equity, justice, and repair. We stand together, recognizing that by defending the most marginalized among us, we defend all of us. We support the advocacy and resistance movements that reflect our multiple and intersecting identities, and we call on all defenders of human rights to join us,” says Felicia Carbajal of the Equity First Alliance and the Los Angeles-based non-profit The Social Impact Center.

The list of cannabis tycoons accused of predatory behavior also includes former Cure/Select Oil CEO, Nitin Khanna, who settled a 2.3 million dollar sexual harassment lawsuit back in 2014, before stepping down from his role at the million-dollar company. While Khanna isn’t scheduled to speak at SXSW, his reported actions are worthy of mention as many activists say “times up” for predatory behaviour in cannabis. Other top brands have been accused of “hiring” formerly incarcerated (equity candidates), only to use their past record for licensure. We must do better.

Organizations are fighting back, though. Marijuana Business Daily reported that The New York Medical Cannabis Industry Association (NYMCIA), a prominent NY Trade show, has uninvited the cannabis giant  [MedMen] to their 2019 show. Only in a curt move of corporate intervention, they’re not bothering with telling them personally.

“(MedMen) didn’t resign, but then we threw them out,” said the spokesman who requested anonymity to MJbiz.

“This protest is the first step towards unifying our communities to create change from the grassroots level up. We will not rest until we see equity in cannabis and in all levels of leadership in society. We work peacefully, while recognizing there is no true peace without justice and equity for all,” says LaTorie Wallace of the Equity First Alliance and Washington, DC-based We BAKED.

Members of the Equity First Alliance, Austin Justice Coalition, Tree Femme Collective, Democratic Socialists of America Austin, TX, and other grassroots justice groups will be gathering to protest in front of the Hilton Downtown Austin where these keynote speeches will be taking place, on Friday, March 15th from 12:30-2:30pm and dropbannersaround Austin calling for equity, justice, and repair throughout the course of the Cannabusiness Track, March 15 & 16th.

Members of the Equity First Alliance, Austin Justice Coalition, Tree Femme Collective, Democratic Socialists of America Austin, TX, and other grassroots justice groups will be gathering to protest in front of the Hilton Downtown Austin where these keynote speeches will be taking place, on Friday, March 15th from 12:30-2:30pm and dropbannersaround Austin calling for equity, justice, and repair throughout the course of the Cannabusiness Track, March 15 & 16th.

“When understood in the context of a War on Drugs that has disproportionately harmed low-income communities of color for decades, this state of affairs requires community intervention” read Equity First Alliance’s earlier press release.